On 12th April, 2013 VOF conducted another Pro-life training in Taplejung the last district of Far-east Nepal joined with India and China border. The training was happened with the active coordination of Christian society. More than 80 people from different churches, district woman and children development association, and media were attended in the training. Many participants were in tears after hearing the teaching and watching the DVD presentation. Mrs. Sita Gurung the woman representative from District women and children development association admitted that the training was best and tough training for her. And Mr. Santosh Purkuti the news reader of Tamor FM also commented about the significance and standard of the training and he also read the news about training through the Tamor FM in evening and morning news. The Ps. Dhana Bikram Iwaram Limbu- the Chairperson of Christian Society shared his experience after the training that he feared a lot and humbled before God. Many realized their past wrong deeds. At last, all the participants were committed to be the voice of the voiceless unborn babies and received the Life saving bags as trainer’s bags in order to train their communities. 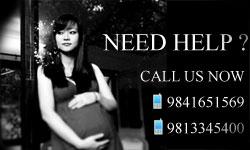