Grace was born in 7th August, 2011 in Paropakar Maternity and Women’s Hospital, Thapathali,
Kathmandu. Grace’s biological mom is paralyzed because of her brain tumor surgery. On this tragic moment Grace wasconceived by her mom. So, Grace became unintended and unwanted for her parents and they wanted to abort 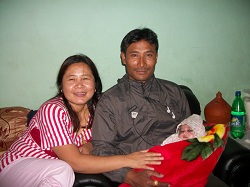 her, but somehow, one of the viewer of Pro-life DVD (wonderfully and Uniquely created and therefore choose life) produced by Gabriel International (GI) met and counseled her. Praise to be God, Grace’s mom changed her decision and wanted to give her for adoption after her birth, because her mom was physically disable. So, Grace’s parents contacted VOF office with the help of that DVD viewer and VOF started giving them counseling and time to time visiting until Grace was born. When the time came, Grace was born and adopted by a loving couple who had been waiting a baby for 9 years since they were married. Today, she is safe and happy with her loving new father and mother.

Silash was born in 3rd. November, 2011 in Kathmandu Medical Collage Public Ltd. of Sinamangal, Kathmandu. Actually, Silash’s parents were guided by one of the viewer of Pro-life DVD (wonderfully and Uniquely created and therefore choose life) produced by Gabriel International (GI) to VOF office when he was 6 months of gestation.

Initially, his parents were of abortion minded, because they already had 4 children and unable to raise another, but after a prolong counseling and encouragement from VOF his parents changed their mind and decided to give birth with a condition of giving him for adoption.
So, there was another couple in VOF’s contact list who were fighting with non-fertility for past 14 years and looking for a baby son to adopt. Obviously, it was God’s provision that Silash was adopted by that couple on last 4th. November, 2011 and named Silash on last 13th. November, 2011. Thanks to be God for His miraculous provision and arrangement to save this precious LIFE.