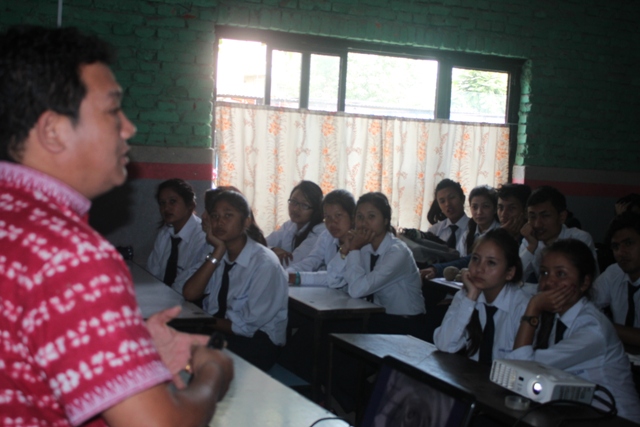 VOF News:May 31, 2016, VOF was called to AIMS International College, Lagankhel in order to give a 90 mins presentation on pro-life education, which was coordinated by trainees. There were more than 55 participants including BSW and BBS students. The presentation began with a short 6 mins intro on Teenage Medical Abortion by making the News 24’s main news as it’s basis. The presentation was given by facilitators from VOF. After that short presentation those participants were asked an open question based on abortion to which few of them agreed, some denied and half of them remained silent. Among the participants one boy named Prakash Thapa Magar took the nerve to express his views related to the topic. According to the boy it is pretty much okay to abort a 12 week’s fetus in the mother’s womb. After hearing what the boy had to say VOF did continuous back to back presentations showing the facts and figures plus Nepal abortion laws. Furthermore, the importance of human life, fetal development, methods or procedures, alternative of abortion were beautifully presented by the presentation, which changed the participant’s perception regarding abortion. Even Prakash changed his views on abortion. At the end those participants were very much thankful towards VOF, Nepal for bringing such an informative presentation.