An Official Announcement of Fund Raising for CMH building Project 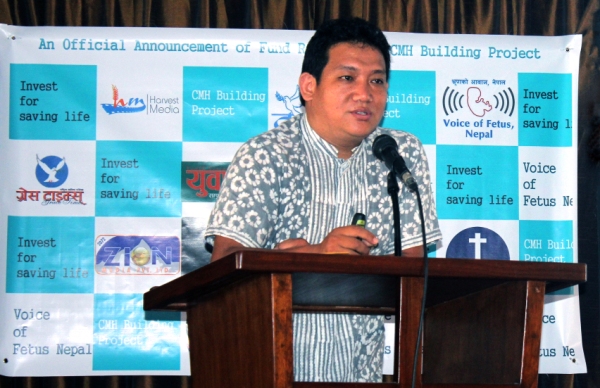 VOF News 30th June,2016, Kathmandu
Voice of Fetus(VOF)Nepal officially announced the commencement of fundraising program for Compassion Maternity Home (CMH) Building project at Pariwartit Jeevan Fellowship Hall, Bagdole. The program was organized in the presence of representatives from different Christian print media, online news portal, board members, and general members, former and present volunteers from different social work colleges. The program began with the executive director Soman Rai (Elisha), presenting on the background of the organization, starting of CMH and addressing the need of CMH building. He also presented on the amount collected up until now Rs.55,00,000 (USD 55,000) which was received from 10\40 Connections and the remaining fund of Rs.95,00,000 (USD 95,000) that needs to be collected for construction of two storeys CMH building in 3,928.00 sq.ft. Area. The media has undertaken the role for publicity for fundraising whereas the volunteers will be taking initiatives for fundraising through different creative activities. A sum amount of money was handed over to the treasurer of VOF Nepal by Ms. Bimala Rai as a seed plantation for the fundraising program. The event marked the official commencement of fundraising program for CMH building project.