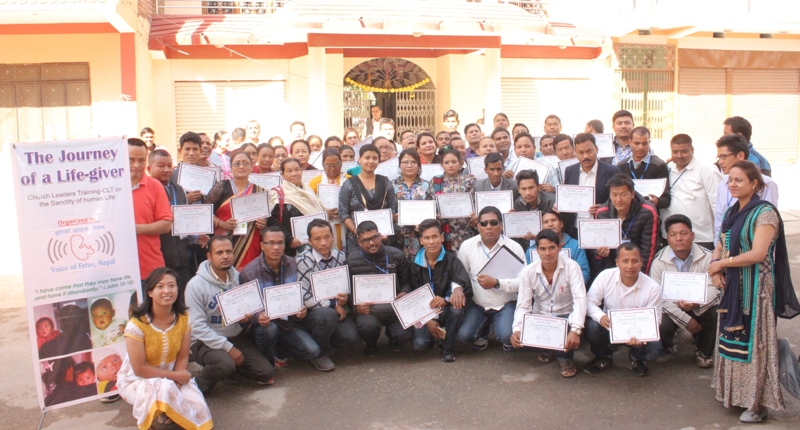 November 1-3, 2017: After the blessed closing of JOL in Birendranagar the team headed towards Ghorahi Dang and it took 6 hours to get there. Though the team arrived there at mid night with tiredness it was really blissful moment to see the participants already arrived there from farther than the team. According to the registration record there were 58 gospel leaders from 28 different church and denomination of 5 different districts of Province #5 gathered together for learning.
From the morning itself most of the team members experienced spiritual attack…most of the team members were suffering from loose motion…But the team prayed together and rebuked the attacks from evil. After few moments, the team got new strength and started working with great excitement. Mrs. Reena Pathak led the participants into deep worship and Soman encouraged them to hear God’s voice. Ps. Sanjeep Thapa shared his story and assured the participants for same blessing in their life too.
Mr. Simon Pathak facilitated ‘Biblical Worldview’ session with great flow and tremendous responses from the participants. All the participants were really excited on knowing the value of human life in the biblical perspective as Soman Rai presented the ‘Sacredness of Human life’ session. Some of them were in tears while presenting the example of the violation against human life. Ps. Navin did his good job presenting the session ‘how to become a life-giver’ though he was taking the session for the first time.

Group work, group discussion and group involvement were really remarkable in all the sessions. The group presentation regarding six spiritual foundation of life-giving ministry were really surprising… it seemed that the groups were very clear with the objectives of their work. The credit goes to the team members as well who really facilitated them. Holy Spirit was actively working among the team members and the participants to work together.
The sessions under the Miracle of Life were also very efficient. Mr and Mrs Pathak presented the God’s design for marriage and family session in a dynamic way that the participants were really blessed. Men were truly open during the Biblical sexuality discussion and Mrs. Susan Kunwar reported that the women were also open…more open than they were in general group. They had lots of questions and wanted to talk more but due to lack of time it had to stop.
During the session of human reproduction, abortion procedures, after abortion most of the people were broken and wanted to share their experience.
There was a Pastor’s wife who is also a social mobilizer shared “I had been looking for such kind training, trainer and materials for long time, because I have seen and heard many of our sisters going through abortion procedures and its complications. I have great passion and burden to help them…”
The participants were totally convinced to speak and stand for life. Ps. Kesheb BK who is also a radio speaker encouraged all the participants to break the silence of churches and raise a strong voice for Pre-born baby. He also admitted his weakness for not being able to speak for them. There were some senior Pastors who confessed that they failed to be a life-giver in their life time ministry. It could be assumed that God was speaking to them strongly and clearly.
Repentance, forgiveness and healing session was very strong.
Each district and church denomination made a realistic action plan which was the sign of multiplication. Overall, the JOL-1 training in Ghorahi Dang remained very fruitful.